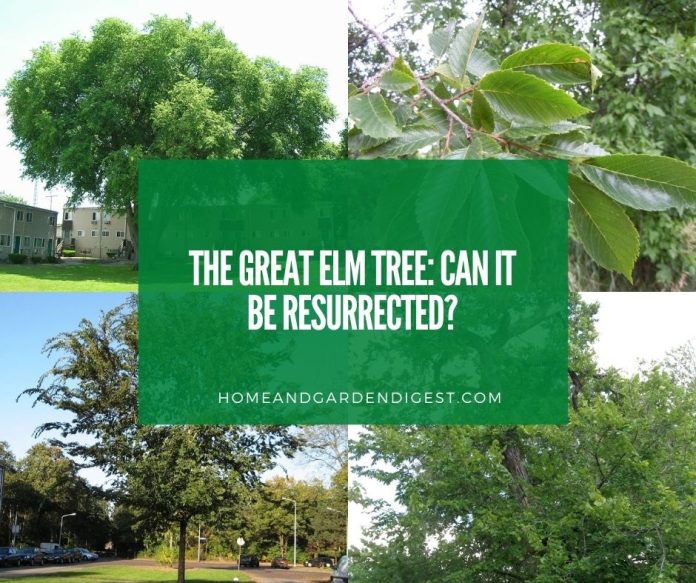 If you were raised during the 1950s and Sixties, you must remember Ulmus americanus, the imperial deciduous tree of the Elm Family (Ulmaceae) that may have ruled your street. In those days, the quiet streets and avenues of many American and Canadian towns were lined, often on both sides, by these stately trees.

They towered like colossal vases more than 100 feet, spreading their alternate elliptical to ovate leaves on long, slender, interweaving limbs and branches that spread 60 feet from 11 foot trunks high above the street to form great arches that blocked any view of the sky.

The mighty elm, sometimes called the White Elm because of its creamy white wood, became the standard for native shade trees after the great American Chestnut all but disappeared from the American landscape. It was remarkably tolerant of urban America’s concrete and pollution.

Until the elm bark beetle arrived, the mighty elm was remarkably hardy. The USNA-USDA plant hardiness rating for Ulmus americanus is Zone 2, meaning it can withstand temperatures as low as -45º to -50 º F. It established itself with great vigor.

The Attack of the Bark Beetle 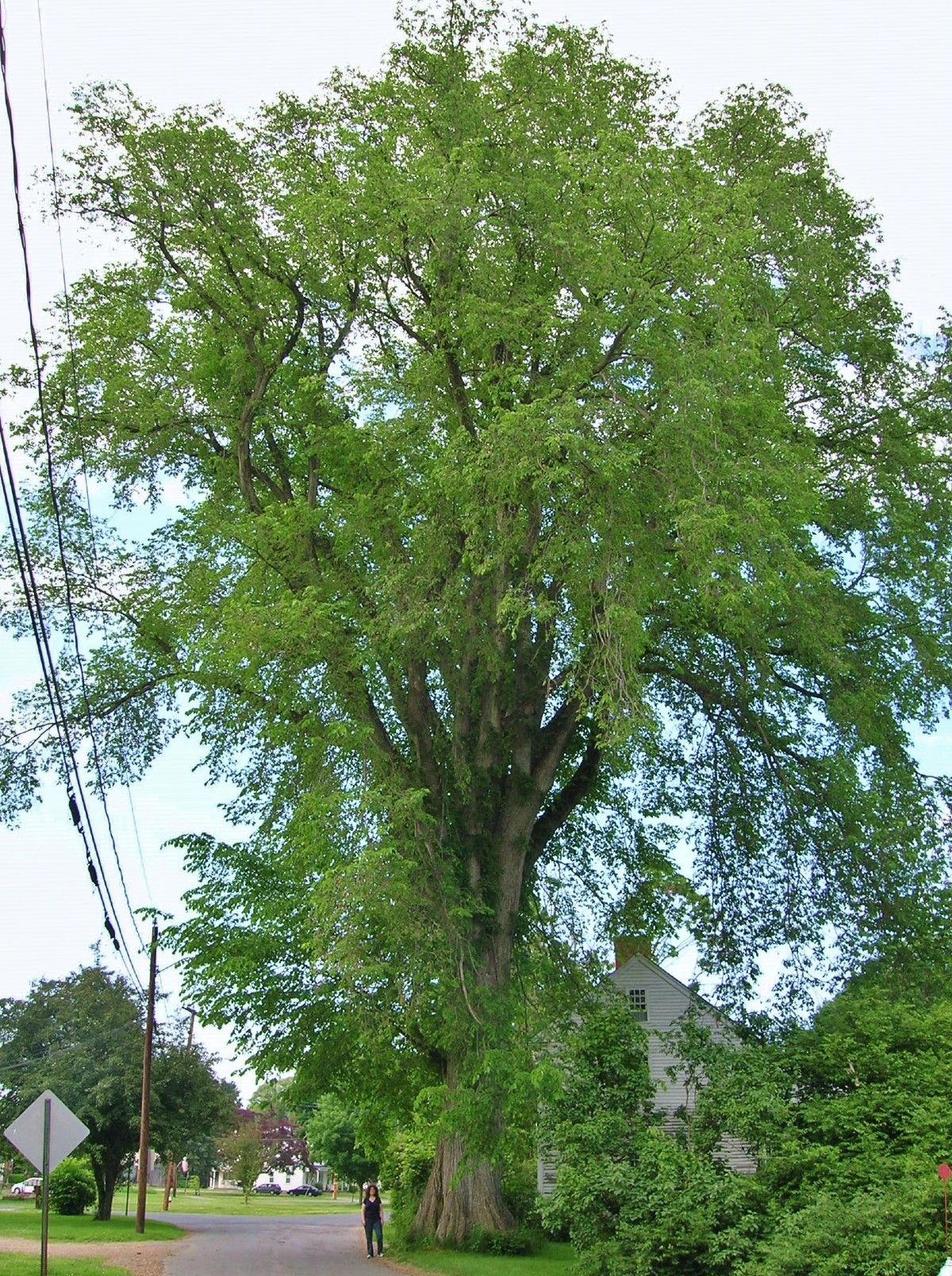 Then, all at once, the American Elm went the way of the Chestnut, destroyed by a deadly pathogen called “Dutch” Elm disease that was so effectively transmitted by the elm bark beetle. How could such a Goliath be brought down by a lowly beetle?

The pathogen, which probably arrived on wood imported from China to Ohio in 1930, plugged the vascular system of every tree it infected, cutting off the flow of oxygen and nutrients so that the trees slowly starved to death. The disease quickly spread from Ohio to the rest of America.

Once found throughout Ohio, especially in wet bottom lands and ravines, but also in fields, fence rows, and open woods where the soil is dry most summers, the American Elm is now hard to find.

Those you do come upon will rarely grow to more than a fraction of their former size, usually dying before they reach 40 feet. These survivors may also succumb to elm phloem necrosis as well as many other pests and pathogens.

Initial slash and burn campaigns failed to stop the disease. An estimated 100 million elms died in the epidemic. Today, tree lawns in North American cities and towns tend to be lined with common Acer rubrum (red maple), especially now that so many Fraxinus americanus (white ash) have also been removed. To identify and manage Dutch Elm Disease, click here.

Will the Great Elms Ever Return? 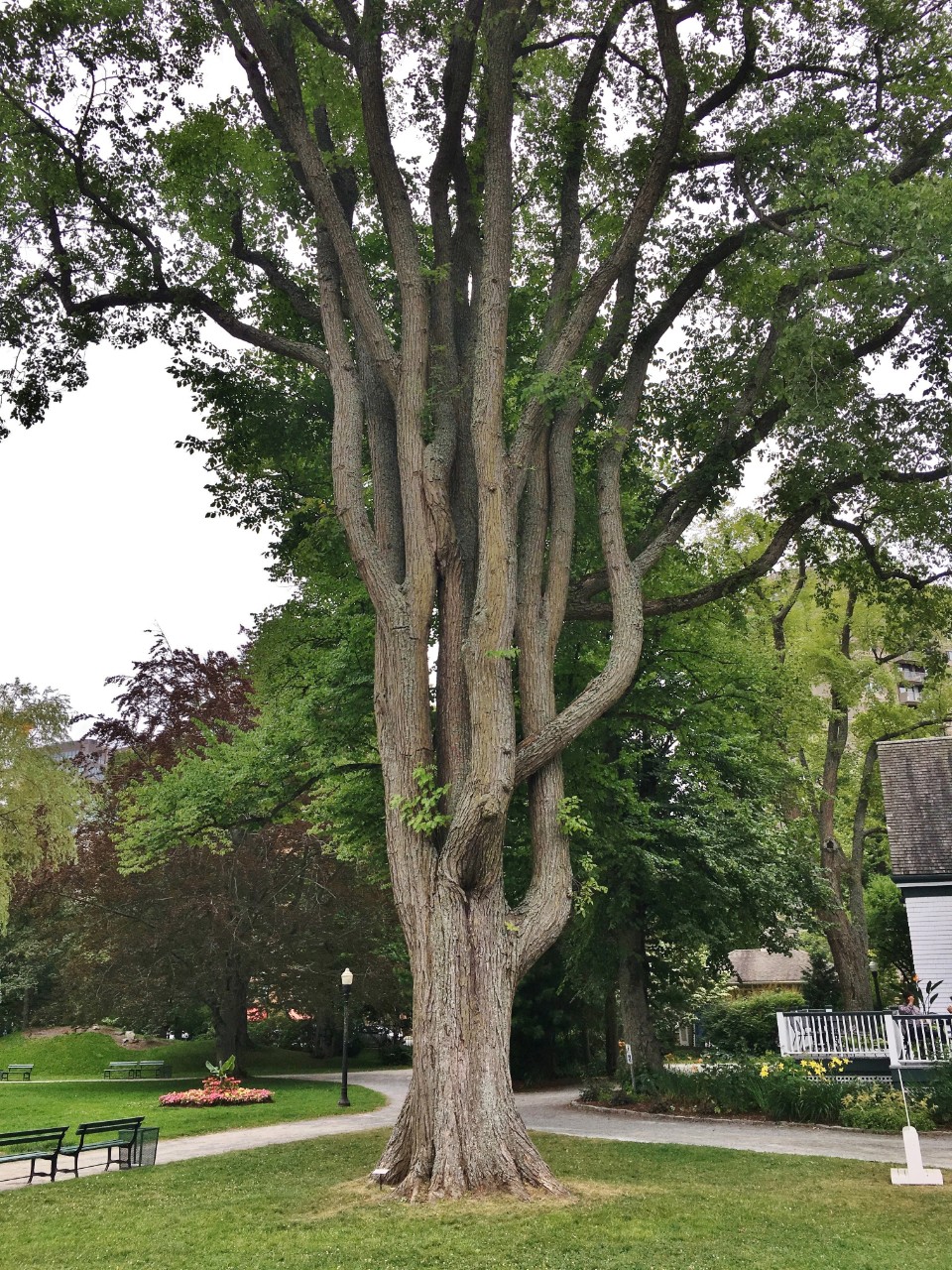 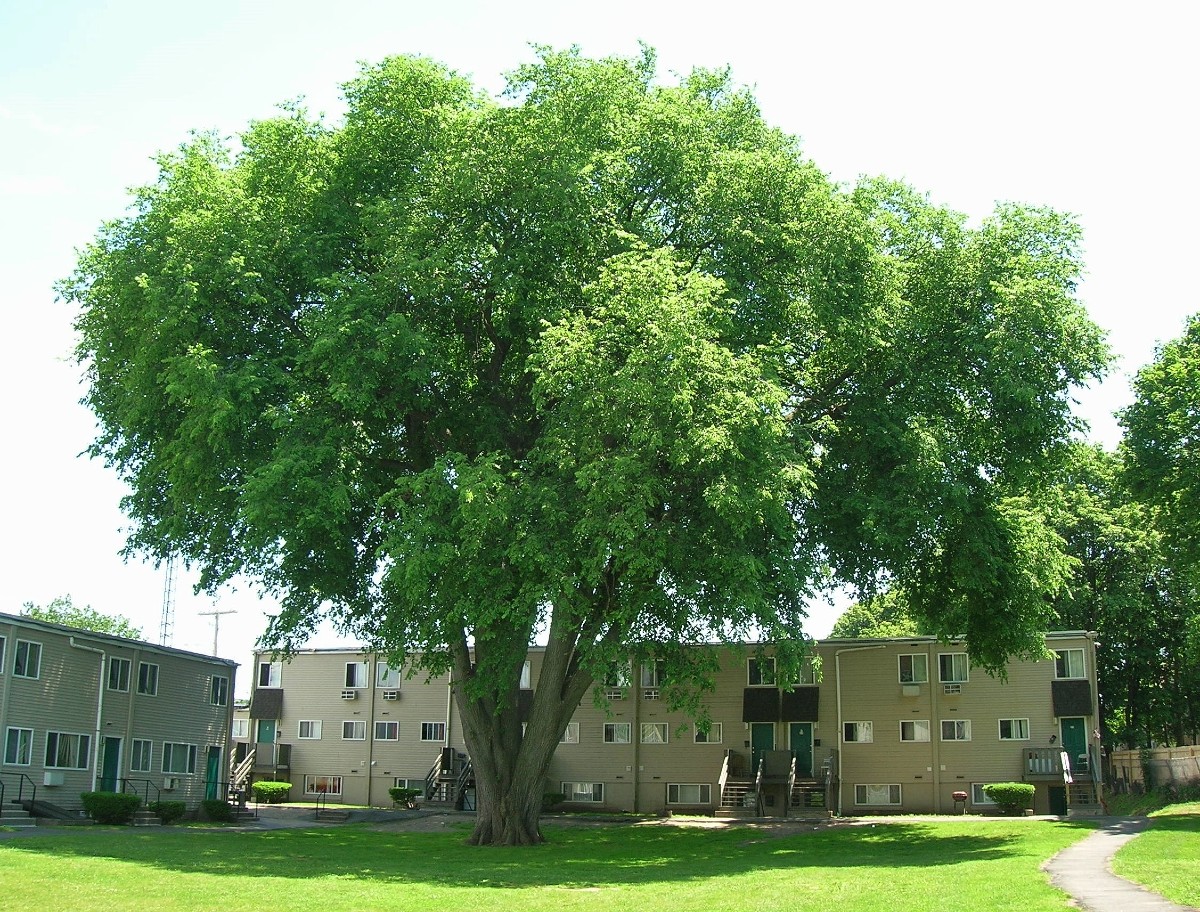 Ulmus americanus could make a slow resurrection, although it will never become the standard that it was until 50 years ago. These stigmatized trees are being sold again to homeowners and landscapers.

About 15 years ago, researchers at the Department of Agriculture’s National Arboretum identified several types of elm trees that are genetically resistant to Dutch elm disease. A veteran nurseryman from Georgia, Roger Holloway, began growing them.

Holloway spent more than ten years on the project before he finally came up with a tree that anyone would dare mass market. The most popular shade tree of all time is now available in a disease-resistant variety, tested and approved for planting by the USDA National Arboretum.

What a wonder for your children and grandchildren if these great trees could again become part of our urban landscape. Sadly, the odds are against it.

Only young saplings of an immature specimen are common now. It is far more likely that wild American elms will vanish altogether in your children’s lifetimes. Too bad, because Ulmus americanus is one of the first to come into flower as its floral buds appear during the very first warming days in January into early February.

Floral buds are found at the base of the previous season’s twig growth. The vegetative buds, however, stay dormant at the top of the twig until spring arrives. By the middle of March, its perfect, creamy-brown to green flowers open.

Although these flowers do not have petals, they are showy, swaying gently on their long pedicles in the cold, harsh March winds while neighboring trees and shrubs are bare and brown. The perfect flowers develop into fruits, or samaras, that are small and oval-shaped.

Tiny hairs grow from a notch at the papery fruit’s edge. The fruit begins to abscisce, or change color, once it begins to mature by mid-spring. The twigs are usually smooth. The tree’s bark develops flattened ridges with intervening, gray-brown furrows. These ridges may interlace once the bark matures.

Deep green leaves turn bright yellow in fall. The elm’s root system is extensive and shallow. The elm tolerates salty soil or sea-spray, drought, alkaline soils (pH > 7.5) . . . almost everything, that is, except Dutch elm disease. It appears to do better in southwestern states such as Texas, where the disease is not as widespread. 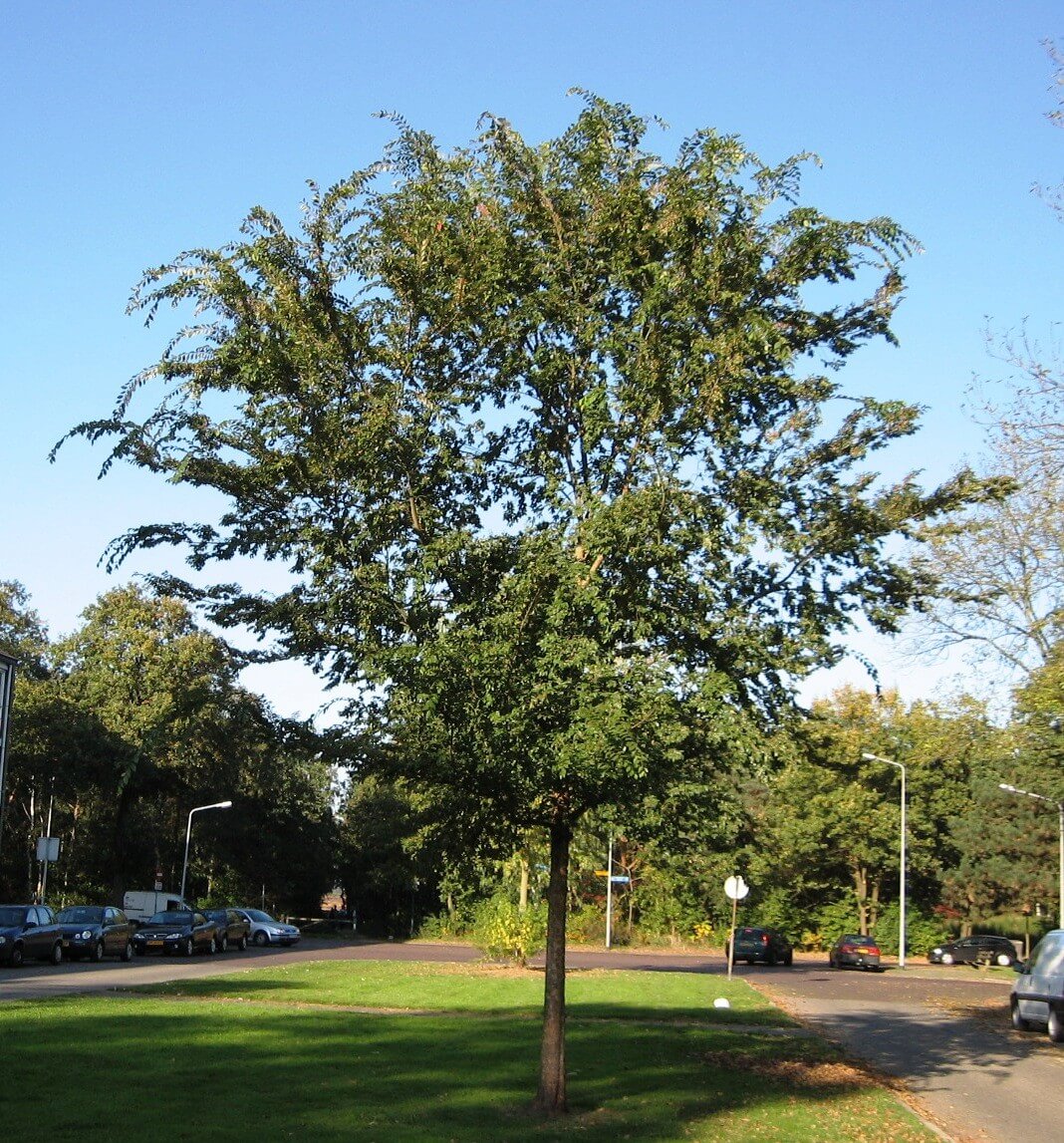 Ulmus americanus that are native to Asia are highly resistant to Dutch elm disease, because healthy trees can manufacture chemicals that prevent the pathogen’s spores from germinating within the inner bark.

These Asian specimens are able to thrive with little or no stress after generations of exposure to the disease, much as the early European settlers in America had developed immunity to the smallpox they carried that killed so many Native Americans.

Like other diseases, the Dutch elm disease fungus functions to eliminate old, weak elms and make way for new growth of healthy trees. In this way, the pathogen is another example — along with purple loose strife and water hyacinth — of the danger inherent in exporting any organism to a foreign ecosystem.

Can a purely American elm be developed to successfully resist the disease that has ravaged it? Can an effective fungicide be developed that could be economically administered?

Some USDA reports claim that two varieties, Valley Forge and New Harmony, appear to be as tolerant of the disease as Asian specimens. Currently available disease-tolerant varieties of American elm should be propagated only asexually by stem and root cuttings because such reproduction ensures genetically identical offspring with the same disease tolerance of the parent plant.

Seed propagation generally should be avoided because the offspring won’t inherit disease resistance.

The American elm was once as naturally abundant as maple, oak, and pine. It was an essential part of our natural landscape and cultural heritage for the first few centuries of our history. In fact, it stood as the first symbol of national independence.

The “Liberty Tree” in Boston, that famous gathering site for patriots to discuss how best to win independence, was an elm. British soldiers destroyed it in a final act of hostility during their retreat in 1775.

Resurrecting the American elm in a disease-resistant variety that could flourish again in North America would make for a worthwhile project indeed. Is there a young, ambitious horticulturist out there who can make it happen? 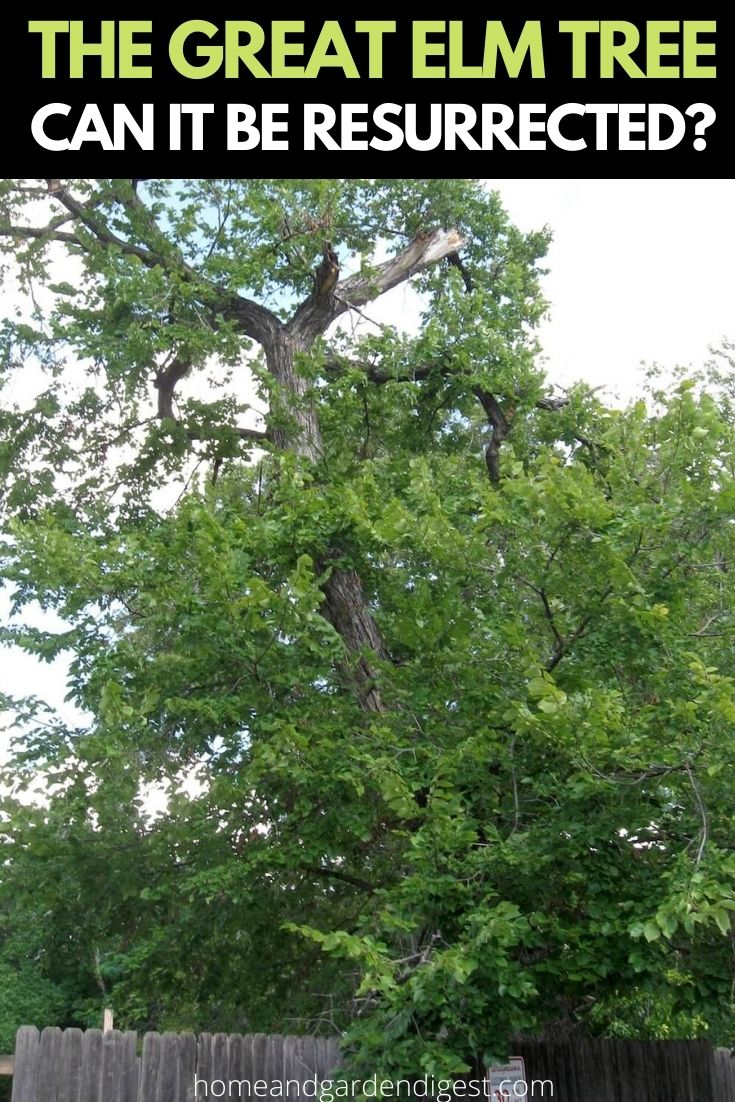