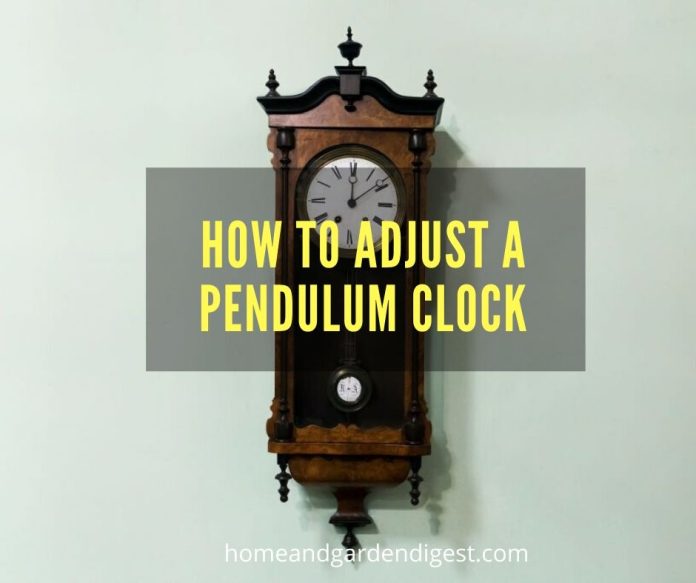 Christiaan Huygen patented the pendulum clock and escapement in 1657. The Connecticut clock companies made them affordable in the early 19th century.

Pendulums on electric and battery-operated clocks are for decoration and have nothing to do with timing, but for mechanical clocks, whether powered by weights or springs, pendulums are the regulators of time. Assuming that the clock is in good repair, there are two different mechanisms that will affect timing:

Time is regulated by the length of a pendulum, or the “drop.” The longer the pendulum “drop,” the longer it takes to complete an arc of movement and the slower the clock runs. Shorten the drop and the clock runs faster. There are two basic types of adjustments:

The first type is obvious: there is either a threaded nut under the pendulum bob (weight) or a knurled wheel in the center of the bob. Adjust the bob up or down in small increments by turning the threaded nut, then run the clock for a week to determine its accuracy. Repeat as necessary until the clock keeps time.

The second type of adjustment is usually indicated by a small pinion hole or a horizontal slit in the dial, and a “fixed,” or non-adjustable bob that hangs onto the hooked end of the pendulum rod. The pinion hole is usually located at 12 o’clock and has a square end arbor; the slit is usually located close to the center of the dial and has a round-toothed wheel protruding from it. Both usually have F and S on the dial and simply by turning the arbor or the wheel in the appropriate direction advances or retards the timing. Without the marking on the dial one must experiment, but usually turning clockwise or to the right will slow the timing.

Some clocks, notably French regulators, will have both adjustment systems. Some French pendulum bobs have two or three glass vials filled with mercury or steel rods to imitate such. These will also have a setscrew at the top of the bob that has to be loosened prior to adjust its height on the pendulum rod using the knurled nut.

Putting A Clock “In Beat” 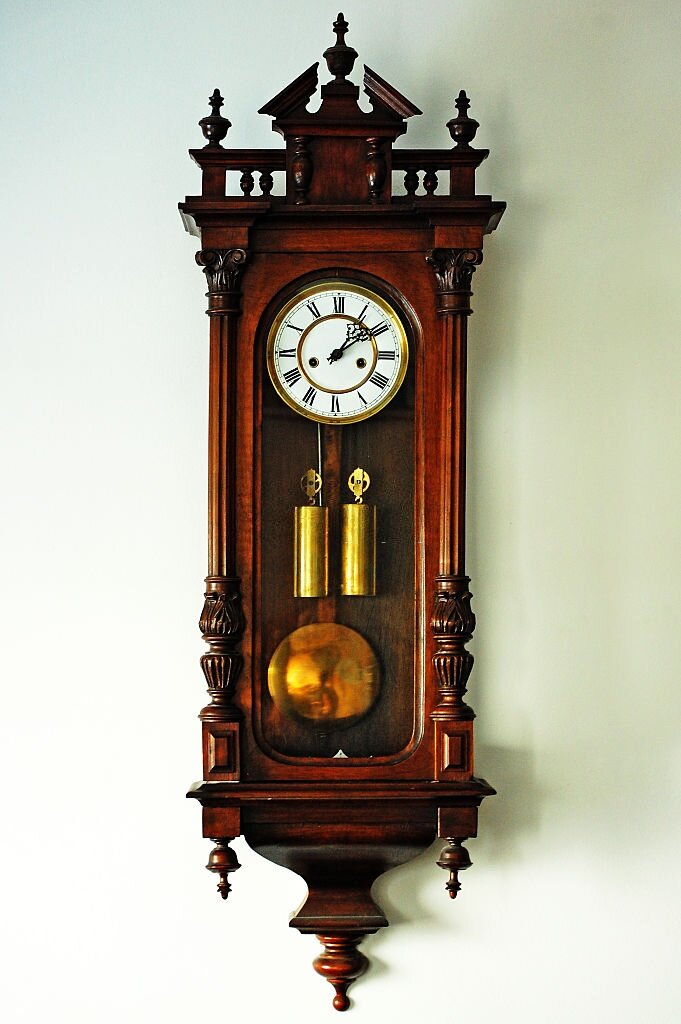 The tick and tock are the sound of the escape wheel (gear) being stopped and released by a rocker, or “anchor,” that is linked to the pendulum rod. One end of this rocker mechanism has a “locking face” the other end has an “impulse face.” The lock, or “engagement,” allows the clock gears to advance only one step at a time; the release, or “impulse” gives the pendulum rod a little push to keep it moving. This tick-tock is called the “beat” and should be perfectly even. If the clock goes tick-TOCK or TICK-tock, it is “out of beat” and won’t keep proper time.

The simplest method is to shim the feet on one side of the clock until the beat is even. Although this is called “leveling,” the clock case might not be level when the mechanical escapement becomes “in beat.”

Another method is to adjust the anchor mechanism – regardless of its style – in relation to the pendulum rod. This rocker is connected to a wire or a rod or linkage that terminates at the pendulum rod. Called a “crutch,” this linkage might fit into a slit in a wooden pendulum rod, wrap loosely around a wire rod, or be a fork that the rod fits between. Adjusting the wire crutch simply requires bending or straightening the elbow, which alternately changes the depth of the engagement or impulse face until the movement is “in beat.” Since wire crutches can be located on either side of the pendulum rod this has to be a personal experiment.

Crutches with forks that bracket a rod or pegs that fit into the slots on wooden rods are usually friction fit to the arbor that attaches to the anchor. Moving these beyond the normal range of pendulum rod movement (right and/or left) usually allows the friction-fit crutch to be repositioned on the end of the arbor. Again, personal experimentation is required.

Higher quality clocks in which the escape wheel and anchor are located between the plates (the sides that hold all the gears in place) often have a setscrew on the anchor. On these the crutch may or may not be friction fit, so don’t force anything that refuses to move when gentle pressure is applied!

A clock should only require adjustment when moved to a new location or after a professional cleaning and oiling. When in doubt consult a professional watchmaker, but once familiar with your particular clock(s) adjustments should pose no difficulty.

WARNING: If a suspension spring is bent it will affect the movement of the pendulum so always remove the pendulum before moving the clock! 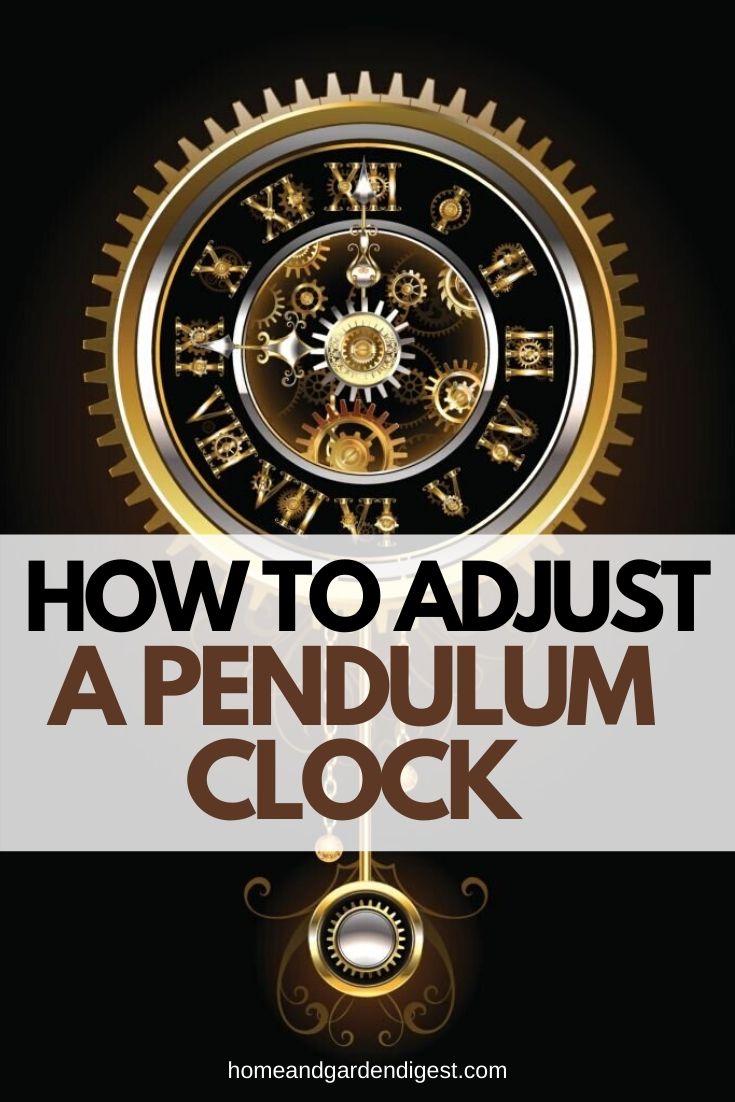 5 Creative Projects You Can Do at Home With The Family

How to Furnish and Decorate an Outdoor Space (WickerPark Patio Furniture)

Setting up an Outdoor Seating Area for the Winter Holidays