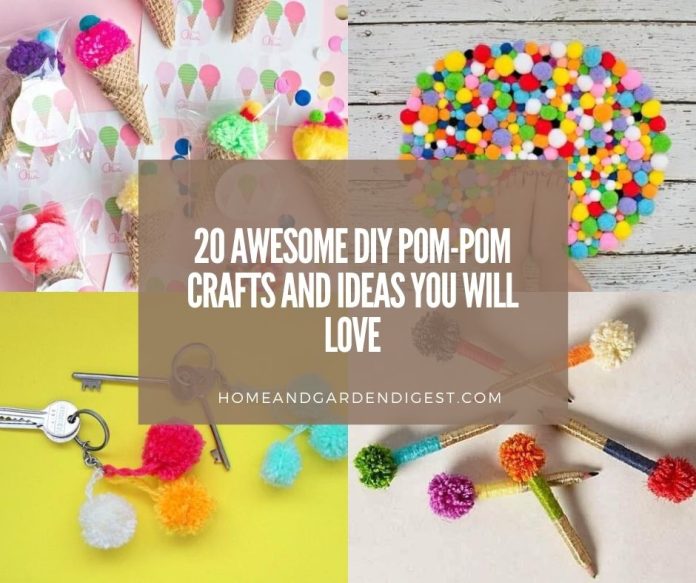 Fuzzy pom-poms are a great toy for every child. Its fluffiness is what entices children and they enjoy waving them around in the air. There are various ways you can modify an ordinary pom-pom to make it even more appealing for the kids.

A pom-pom is one of every child’s favorite toys and there are unlimited ways in which you can get creative with it.

Whether it’s adding tassels, or transforming it into a farm animal, your only limitation when it comes to pom-poms is your own imagination. And it’s also an effective way to boost your own child’s imagination and make them better with craft. Added to that, it is also an excellent way through which you can bond with your child and spend quality time together.

Here are our favorite 20 ways in which you can make your pom-poms even more amusing. 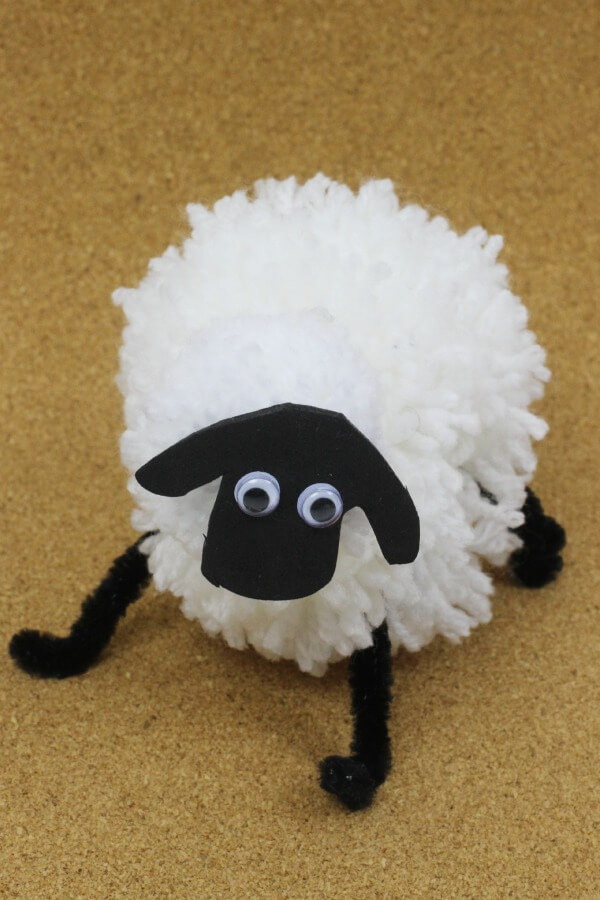 Isn’t it a good idea to use your child’s favorite barnyard animal as inspiration to modify his pom-pom? Converting a pom-pom into a sheep figure is like breathing new life into the toy and this will guarantee your child paying more attention to the pom-pom than he did before. 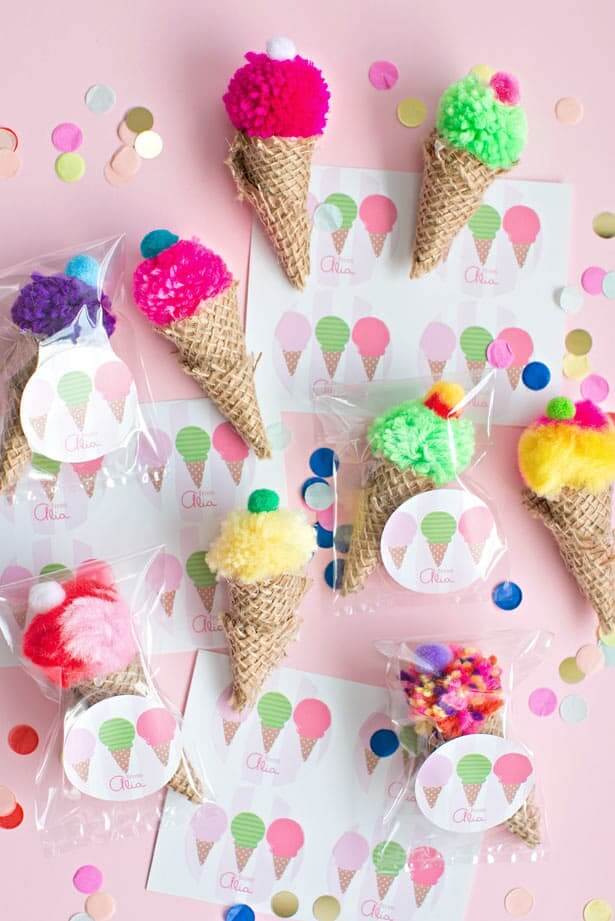 Or instead of an animal, you may prefer recreating the pom-pom in the form of your child’s favorite snack, which is an ice-cream. This delectable toy is sure to receive a lot of love by your children. 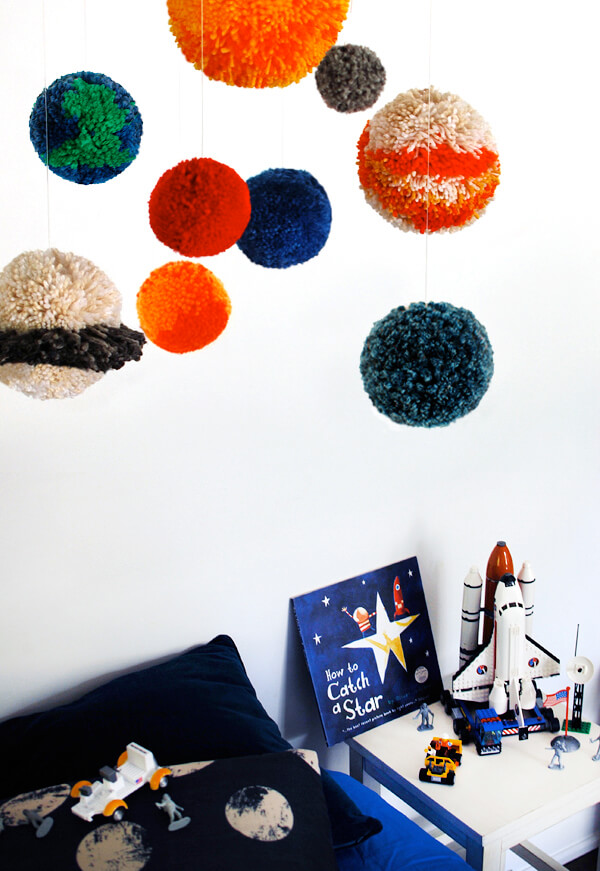 What better way to mix fun-time with an educational lesson than by redesigning the pom-poms as planets? With just the right number of pom-poms, you can essentially recreate the whole solar system to teach your child. This fascinating method of learning is sure to boost their knowledge whilst having fun. 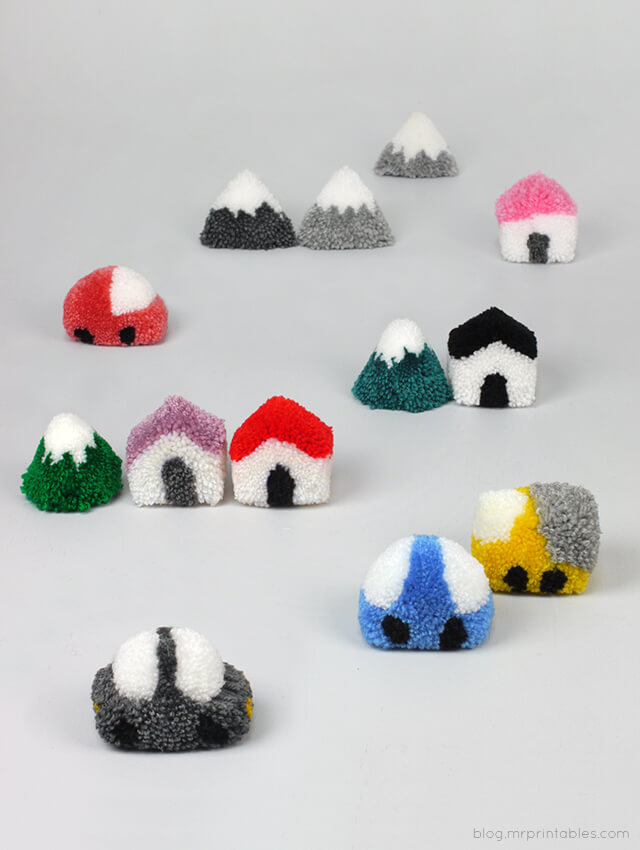 Making your own little village using pom-poms is a pretty good idea, isn’t it? You can remodel a few pom-poms as houses, and the rest as mountains to recreate picturesque scenery. 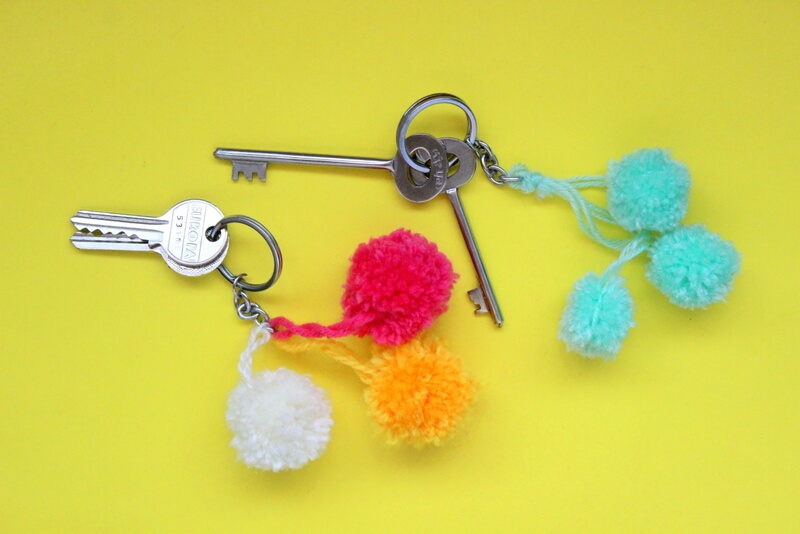 If you have pom-poms that are smaller than the average size; you might want to use these tiny pom-poms as fashionable keychains you can proudly display while walking down the street. The vibrant colors of these miniature pom-poms will also ensure you never lose your keys and serve as a good toy for your child to play with when he’s bored. 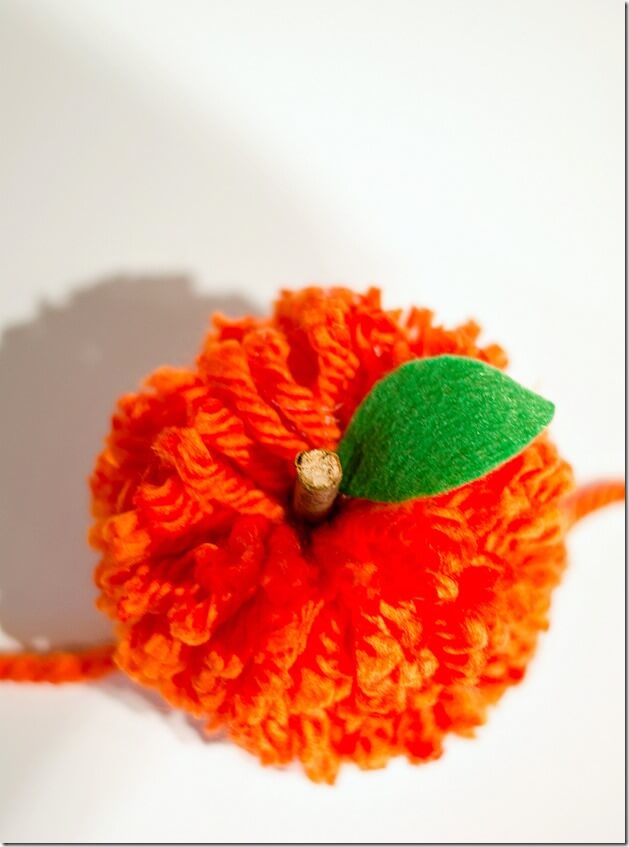 Pom-poms can also be re-imagined to resemble vegetables; in this case, a pumpkin. Designing a pom-pom to a veggie might make your child more interested in their greens so this DIY also offers a health advantage. 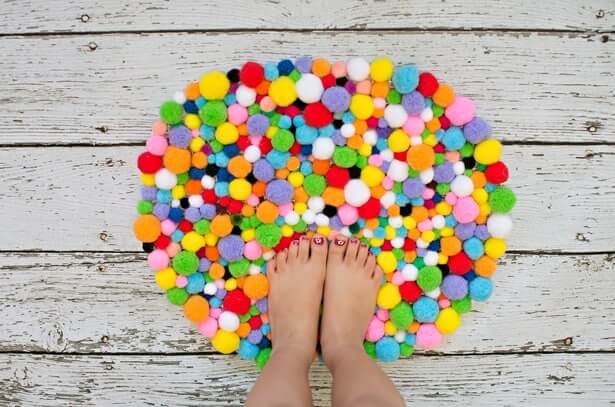 The fluffiness of a pom-pom makes them an excellent rug. It will be gentle on your feet and it’s pretty cost-effective too. 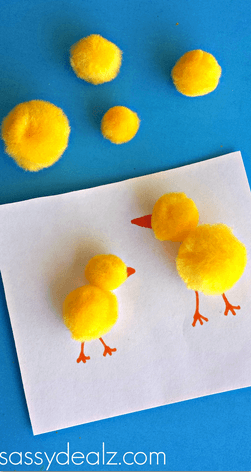 Apart from sheep; you can also redesign your pom-poms to resemble a chick which is another favorite among little kids.

Pom-poms can also be transformed into an accessory item for your pencils. Convert the boring pencils in your pouch into something more fun by gluing or taping a pom-pom over them.

Fancy making your fridge more decorative? You might then like the idea of using your pom-poms as a fridge magnet. The multi-colored pom-poms will make your fridge look more vivid and lively. 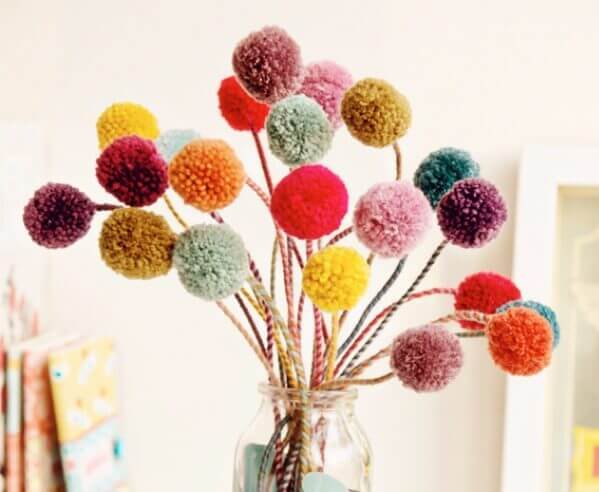 Rather than fill up your vase with ordinary flowers; why not opt for something more uncommon and unique? Using pom-poms will make your vase stand out from the rest. 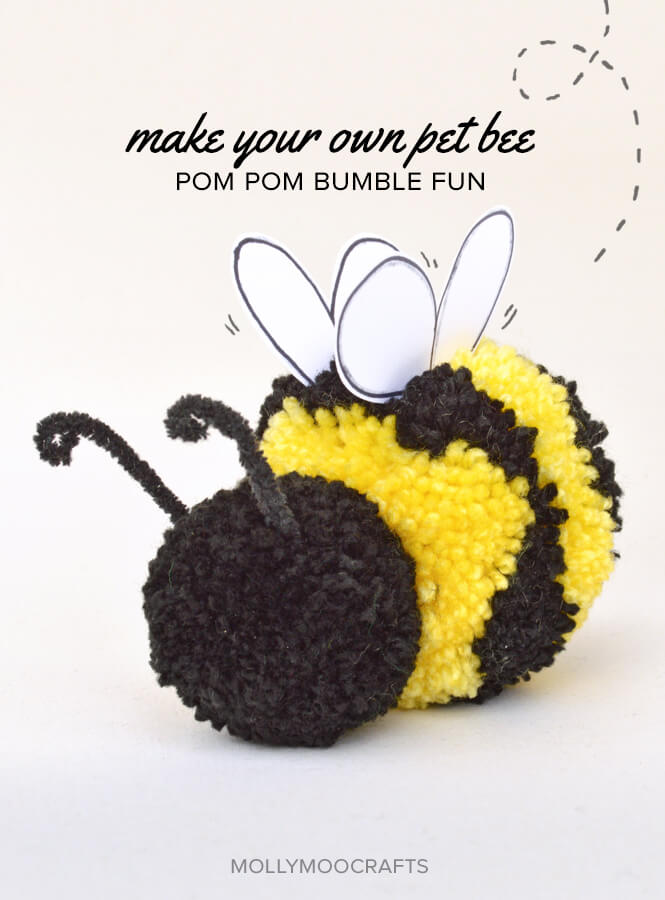 A black and a yellow pom-pom along with a cutout of wings is all you need to recreate a bee in your child’s playroom. It looks extremely cute and unlike a real bee; it’s not dangerous at all so you won’t have to worry about a sting. 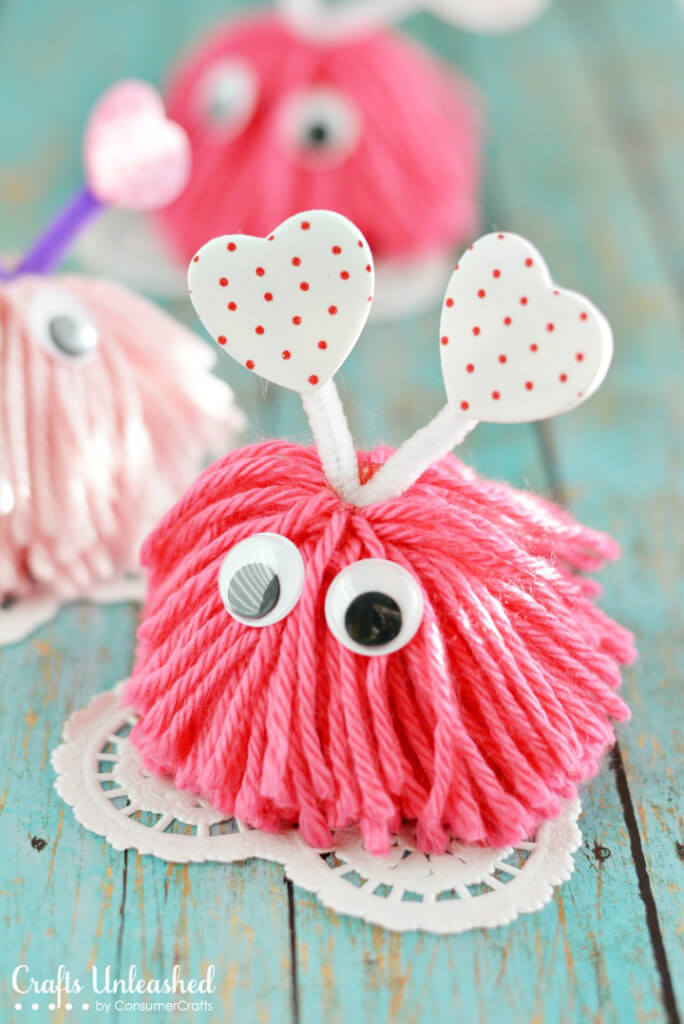 A love monster is a cute addition to your child’s toy closet and he’ll end up loving you all the more for it. 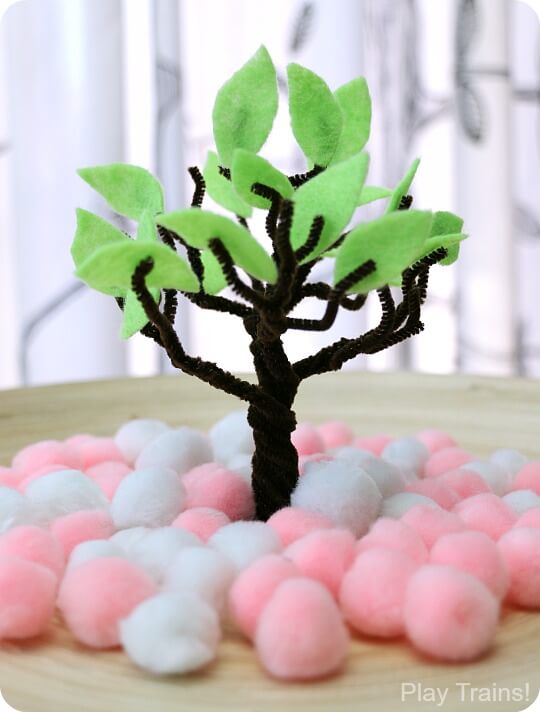 A cherry blossom tree designed from pom-poms is easy to make and even better to look at. Pink pom-pom fluff balls are what truly make this tree a work of art. 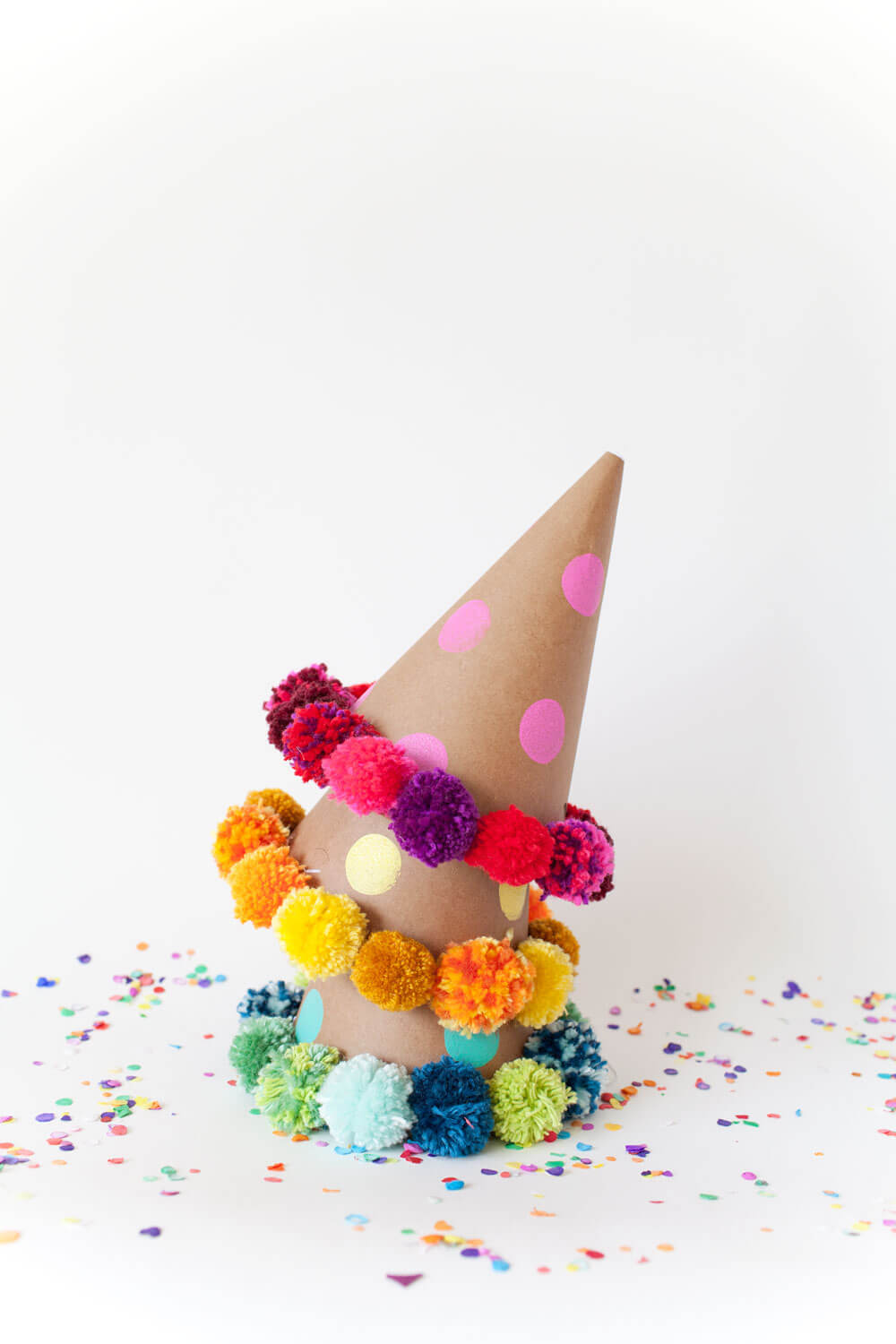 You can keep in theme with a child’s party by lacing the edges with a couple of pom-pom fluff balls. It IS a child’s birthday party after all. 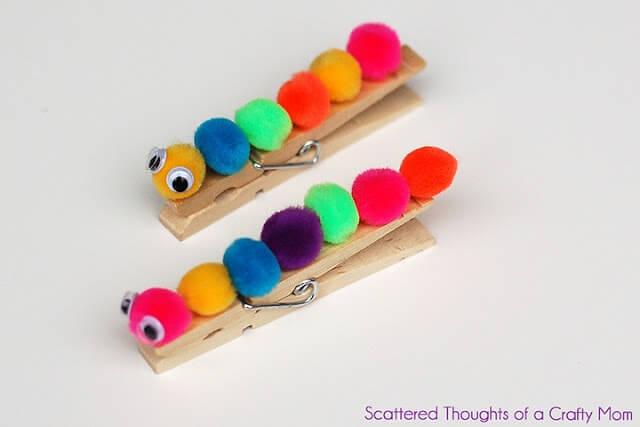 Yet another favorite animal of kids which can be recreated using pom-poms. To add to the funkiness of the caterpillar; each segment can be illustrated using a different color to make it a multicolored beast. 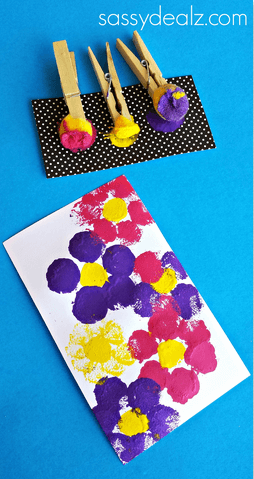 Dip pom-poms in different shades of colors until they are smeared. And then press them lightly against a piece of paper to make a beautiful pattern with the aid of nothing but pom-poms and color. 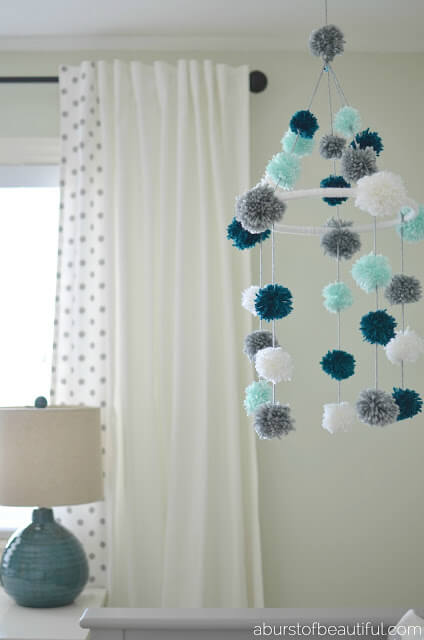 The crib of a baby is incomplete unless you hang a little chandelier of pom-poms over it as decoration.

Bookmarks can also be personalized and made more colorful with the use of pom-poms.

Do You Know Which Resin Is Used For Resin Art?

How To Make Newspaper Bowls and Purses