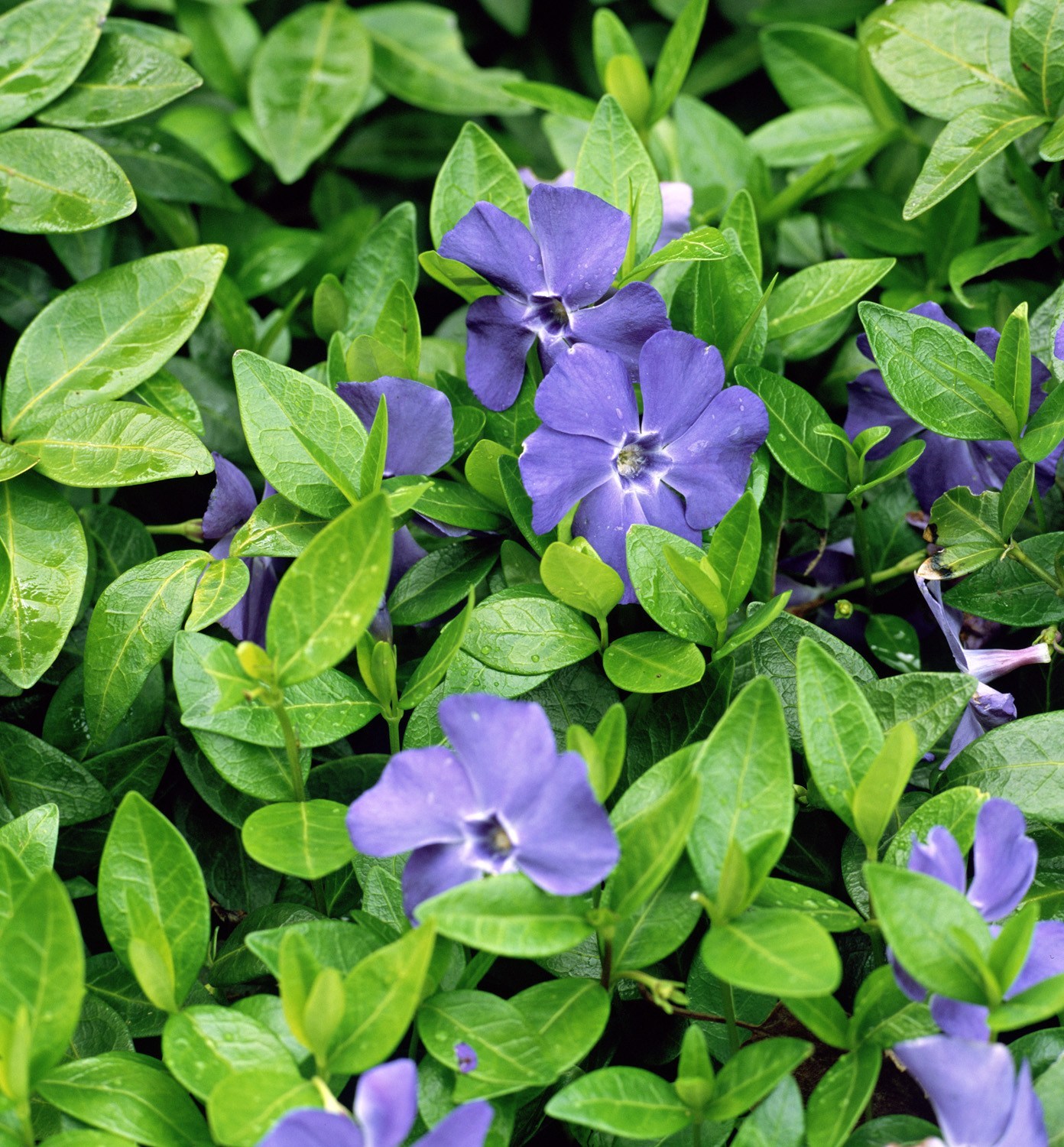 Vinca is popular among gardeners due to its ability to thrive in conditions most plants would have difficulty growing under. Bare patches in lawns where soil is vulnerable to erosion or under shade trees are perfect locations to plant Vinca.

Vinca Plants are Useful in the Landscape

Sloping areas in the landscape, whether due to hills, ditches or constructed berms are vulnerable to top-soil washout during heavy downpours. Rain can wash away nutrient rich soil leaving behind bare areas which become even more vulnerable to erosion with nothing to hold the soil in place. Gardeners have several options open to them to solve the problem:

Vinca minor, better known as Common or Lesser Periwinkle, is a smaller, more delicate version of Vinca major. Dark evergreen leaves are thick and glossy on the shrublike plants. There are variegated varieties, as well. Flowers may be white, purple, lavender, or a reddish copper and be either single or double blooms. Because of their growth habits, both forms of this perennial plant make excellent ground covers and will form a thick low growing mat that assists in preventing soil erosion in susceptible areas.

Vinca grow best in shady areas and will thrive in many areas where other plants will suffer. It prefers good soil when getting established, but once its roots are set it doesn’t require enriched soil.

Although it may wilt in severe drought conditions it will bounce back quickly once water is available again. Even though it is drought tolerant Vinca prefers moderate watering, not soggy soil. It will survive competitive tree or shrub roots. This makes it particularly useful under shade trees where grass grows thin and roots are just under the surface of the ground.

Vinca is cold hardy, but can suffer some foliage damage at 15 degrees Fahrenheit or lower. Despite any harm caused by a freeze the plant recovers in a short time. Typically, the Vinca isn’t bothered by heat, especially if planted in the shade, but may require more water.

Occasional pruning is advised to control random growth and to keep the plant within limits. Vinca major is considered an invasive plant and may be difficult to remove once established. Pruning will also renew vigor.

Using Vinca Around the Yard

Plants may be set in the garden from containers or flats at any time during the growing season. Bare root divisions are best planted during the cool season. When planting Vinca major space plants 18 to 24 inches apart. This spacing ensures a quick cover. Vinca minor may be planted from containers or rooted branches about 6 inches apart in good soil and they will fill in by the end of summer. Bedding plants can be found at local nurseries or the garden section of department stores.

Vinca major may be used as a bank cover or woodland filler. The trailing branches will climb fences and cascade out of planters. Vinca minor creates a beautiful mound of color under trees and around bushes. Lovely in containers on patios and pool decks, particularly under shady areas the plant adds color and interest to dull low-light areas.